Although the martial art system is simple, stick fighting training in Sinawali is quite difficult. Many people tend to ignore the training, thinking that it's unnecessary. But sinawali training can enhance your stick fighting skills, especially if you know how to do it right.

Read on and learn exactly how Sinawali is done during training.

When training needs to be safer and more dynamic, the stick is used in place of the blade. But that doesn't make the stick less formidable. With the stick, sinawali training can be faster and stronger.

Mano-Mano is the art of hand-to-hand fighting. The art symbolizes all the methods related to stick fighting, but the practitioner utilizes his body's different limbs as striking tools, rather than the weapons. The technique, rhythm, and movements in Mano-Mano resemble those of Arnis' with minor differences. Mano-Mano system combines effective counter-offensive and defensive strategies from every martial art in the world.

Although usually regarded as a street fighting art, Mano-Mano takes pride in itself of the smooth and straightforward but weakening techniques it has.

Mano-Mano was developed hundreds of years ago by Filipino warriors. Arnis is the mother of Mano-Mano, a native and original Filipino art. It gained famous enthusiasts from around the world, attempting to protect its initial and desired forms to remain untouched by the influence of other martial arts.

The perspective caused the questioning of its validity to protect the practitioner whenever he has no rattan stick with him. The constant scoff from other martial arts gave rise to Mano-Mano, the art of the cane, also regarded as the art of the hand fighting. Mano-Mano movements and techniques are derived from Arnis, kali or escrima, which means the extension of the hand.

It is the primary Arnis fighting system. Solo Baston isn't limited to stick alone; it has something to do with bladed weapons as well. The system can be further broadened to other familiar objects like the umbrella, walking sticks, pen, comb, newspaper, and magazines that are excellent examples of weapons. 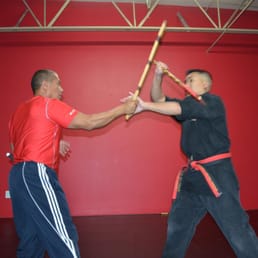 The system has conventional and modern applications and techniques. These methods are the fundamental systems that enhance skills in grabbing, catching, pushing, and pulling, disarming, locking, blocking and striking techniques.

It's a simplified form of the traditional Espada y Daga. The weapons made use of a short stick, a knife as well as a rattan stick. In performing Arnis y Daga, the practitioner studies to combine short and long-range strategies. Without the weapons, the Arnis y Daga concept is best demonstrated in long-short combos like an uppercut or a straight strike.

Sometimes called Sinawali, Doble Baston Stick Fighting Training is another form of play in Arnis. Swaying the stick in a zigzag movement does the advanced double sinawali. The Doble Baston movement is artistic but can as well be utilized for self-defence uses. The Sinawali is a fundamental element of Arnis practice, requiring the use of 2 sticks.

The word “Sinawali” came from the term “Sawali,” which means to weave. Sawali is a material utilized by early Filipinos to construct the Bahay Kubo. Sawalis are intertwined with each other. Thus, the interwoven pattern implemented by the sport. The traditional Sinawali has merely three methods namely: redonda, single sinawali, and double sinawali.

In Modern Sinawali, one must develop his timing, speed, agility, power, and harmony. The Sinawali enhances the footwork, reflexes and body movements which are necessary for the training. Therefore, the Sinawali functions as a vital groundwork exercise to the elaborate methods of doble baston, solo baston as well as Arnis y daga leading to the Modern Mano-Mano.