While training to sharpen your Arnis, Filipino Kali, and Eskrima skills, you will have to spar and fight at some point. And if you train properly and follow the tips in this post, you will be prepared.

You will be ready for sparring day! Begin your workout here.

Sparring will develop your reflexes and your ability to apply the techniques you've learned in a fight. Thus, sparring will prepare you for a real fight. Sparring for the first time, you'd be compelled to use timing and speed in applying your techniques against a mobile a trained opponent.

What happens during Filipino Kali Sparring

When your enemy does not strike you as you practised, and doesn’t wait for you to complete a technique, then it can be a challenging situation for you. Having a guided and directed exposure through arnis kali sparring and other related drills will ultimately enable you to apply your skills in this more chaotic and intense environment.

Although there are numerous ways to spar, the primary objective is often to hit your enemy without being hit yourself. Sparring can take place from light but a practical aspect or hard, intense and more competitive, where each player is attempting to win over the other.

Sparring can also be continuous, where both players continue to fight even if they have been already hit, or it can be stopped early if one of the players is hit critically. Every technique has its specific uses, and an excellent sparring program is one that utilizes various approaches.

The result of such an activity should be an enhanced ability to hit the enemy effectively without injuring him simultaneously.

While sparring, there will be basic techniques that you need to develop in order to advance at a sparring session. This begins with body coordination. When a practitioner is well coordinated, he or she will never be distracted when it comes to maintaining the right form and movement. The right form will eventually be a habit.

To get into the habit of attacking, defending, and counter-attacking during arnis eskrima sparring, you can achieve this by spending the time to get coordinated.

If you don't develop the proper body mechanics and coordination, then your movements would be erratic. Even professional athletes – with years of training – have the tendency to become erratic during sparring. These erratic movements occur when you second guess your body mechanics in the midst of a competition.

Instead of responding to muscle memory – which is developed over numerous practice sessions – they try to work out the established mechanics. Executing these stunts short-circuits all the previously established coordination, taking them out of their best performance which they have to maintain.

I frequently notice this in FMA when a practitioner first learns the double baston pattern. Once he or she gets the pattern, he or she can carry on so long as he or she doesn’t think about it. However, once he or she attempts to modify to enhance his form, he or she then lose it!

You do not want that during sparring sessions. It may be too late to fix this especially when your opponent is always on the attack.

Fluidity is essential in kali escrima arnis for you to easily transition from attack, defence, and counter-attack. Work on your striking techniques. Synch your combination until they’re fast and smooth. Practice good footwork with striking. To archive this, you can’t just strike, move, and then hit again. You have to hit and move simultaneously. 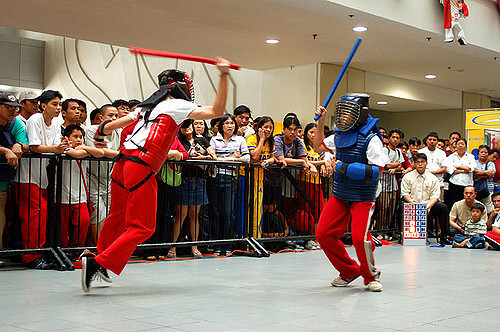 Practice striking continuously and make it a habit to transition from one combination strikes to another fast and smooth. Practice going in different directions without disrupting your footwork and rhythm. This can prepare you for a fight with a mobile opponent.

The aim in eskrima arnis sparring is not just speed and fluidity but also precision. You need to move with perfect distance and timing and you have to be on target. If the mechanics are consistent, you will know then just how far your strikes can reach your opponent, where each strike will actually. You must also be able to recover your posture after the attack.

If you are aware of this, it will be so much easier to make adjustments while hitting an elusive target. Also, by working on your strikes, you'd know which combinations to use at a certain distance, angle and situation – making its delivery more instinctive and natural.

Essentially, you need to have a point of reference which will enable you to measure your distance, speed and timing so you will not lose your target while changing directions. Without precision, your movements would be wasted since you will miss your target.

You have to control your strikes to hit your target in escrima kali sparring. Even though you’re only shadow-fighting or striking in the air, your aim can still be improved. Have a visual spot in an environment of your choice, and ensure that your strike passes through that spot.

When you strike a dummy, tire, or your sparring partner’s stick, never forget to set your target points. You can paint or mark to add minor or smaller targets to your tires or dummy. If you have a training partner, target the burn mark of their stick. If you don’t try to hit a certain target, your aim won’t improve.

Oftentimes, a competitor's conditioning is a major factor in a sparring match. Moving at full speed can be quite challenging. You can build stamina through shadow fighting, tire training, and performing cardiovascular exercises. Experience is nothing if you're too tired to continue the fight.

Practice your moves in a manner that imitates a real fight. You can go beyond practising your footwork in patterns or isolated triangles. Do not limit yourself to hitting in numbers. Practice your combinations first, then your footwork, and then striking fast, strong and precisely as though with a real opponent.

Though the triangle is important for practising a technique, it’s just the first step towards a complete offensive or defensive maneuver. And when you are sparring, you will have to change direction and coordinate numerous steps together.

Your Filipino Martial Arts (FMA) skills are useless if you can't apply them in a real fight. So you need to develop them right. Sports science categorises skills as either open or closed skills. Closed skills are the ones used in a controlled setting where certain responses can be set up. In sports, this is often something that’s self-paced such as gymnastics, golf, or archery.

Open skills are ones that are used in unpredictable situations. The responses are based on what occurs in the environment and are therefore paced by factors beyond your control. Such skills are found in sports such as football, hockey or basketball where there are several opponents making different movement simultaneously.

In Kali martial arts schools you need to learn both close and open skills to become a complete martial artist.

Skills vary from closed to open with numerous factors considered. In kali escrima, we have to focus on the open skills. We need to be prepared for the real thing and do practice sparring so the techniques can be adapted to a more dynamic situation.

If you wish to move well and be ready for sparring, then adopt 5 essential training to enhance and refine your skills. In fact, sparring should be an instrument to enhance your skills.

Practice your sparring skills like any other athlete would – build yourself up and examine your progress. This will make you look good during the match, and make you a formidable opponent as well.

And you have questions, ideas, and anything to share, don't hesitate to write them in the comments. We would love to hear from you.