With over 7,000 islands and a vibrant history, the Philippine archipelago has several wonderful Filipino dishes of its own. Privileged with a richness of tropical fruits, seafood, and creative cooks, there is more to Filipino dishes than the overwhelming “balut” or duck embryo. You just need to know where they’re found as well as how to eat them. 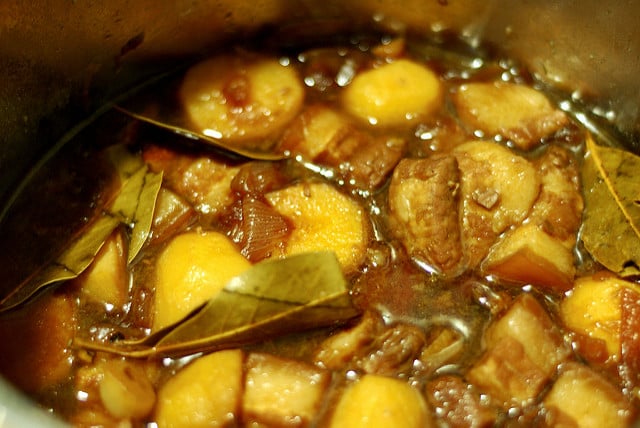 Filipino food wouldn’t be complete without everyone’s favorite – adobo. A popular dish in every Filipino household; it is Spanish in origin. However, Filipinos discovered that cooking meat (frequently pork and chicken) in soy sauce, vinegar, salt, pepper, garlic, and other flavors was a useful way to preserve it without the need of refrigeration.
This cooking method can be applied to various meats or seafood. Its best sample is found in a Filipino home, yet the garlicky variety of lamb adobo can be located at Abe Restaurant, Taguig. 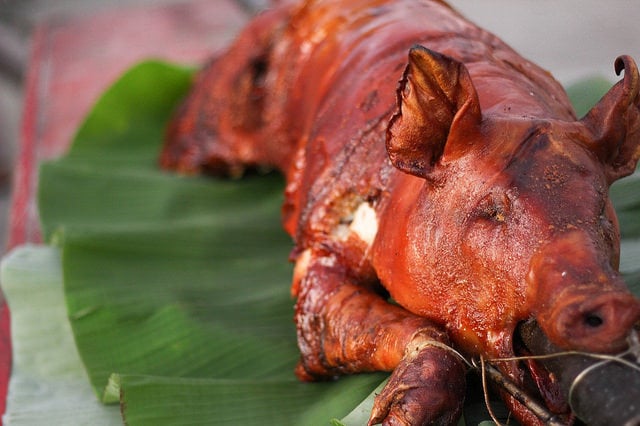 No party would be complete without the lechon, a spit-roasted pig, with the crisp skin served with sauce, the most sought-after part. In Cebu, the pig’s stomach is stuffed with spring onions, star anise, pepper, lemongrass, and laurel leaves resulting in a very tasty lechon, without the need of sauce. In Manila, people can get lechon from Elar's Lechon; in Cebu, the best is found at CnT Lechon. 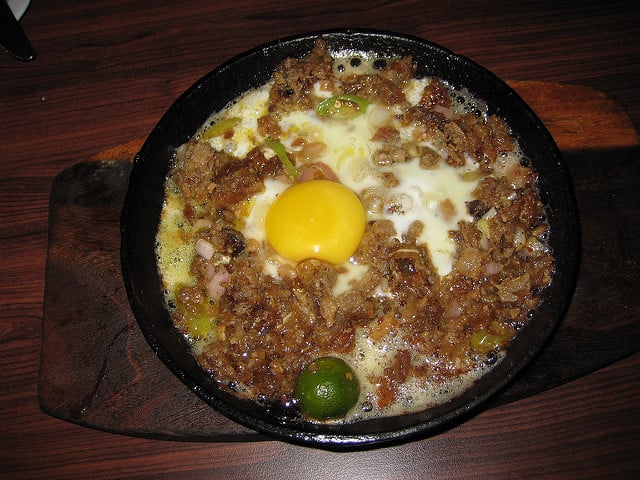 In Filipino food, nearly every part of the animal never goes to waste. In Pampanga, they turn the pig’s liver, head, and cheeks into a sizzling food called “Sisig.” The chewy and crunchy texture of this starter dish is an ideal match for a beer. Serve with Knorr seasoning, hot sauce, and calamansi to suit you and your buddies’ preference.
Credit goes to Lucia Cunanan or “Aling Lucing,” who re-invented this dish at her humble booth along the railways in Pampanga. While Sisig can be served in numerous restaurants in the Philippines, try Aling Lucing’s Sisig, the original version. 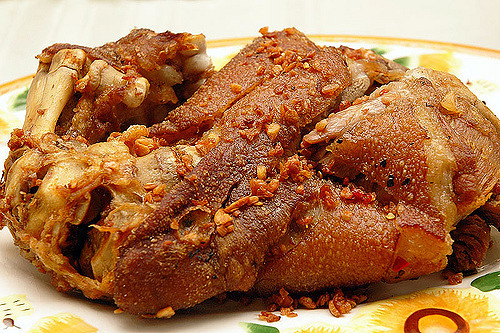 This dish is not for anyone who’s easily spooked. The pork knuckle is boiled gently, drained, and then deep fried until crisp. The meat is tender juicy, with a crispy, crackling outer appearance. Served with soy sauce, vinegar or calamansi, and chili. 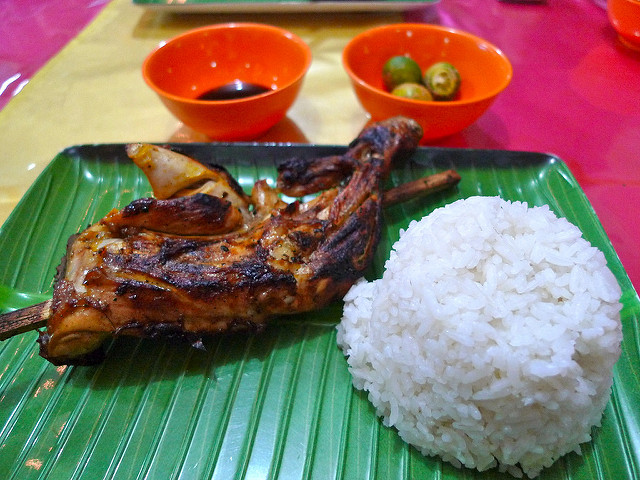 Yes, it is indeed grilled chicken. But this isn’t just an ordinary grilled chicken in Bacolod. The meat is soaked in calamansi, lemongrass, salt, garlic, and pepper and brushed with achuete oil. Each part of the chicken is grilled– from the drumstick (paa), breast (pecho), gizzard (baticulon), liver (atay), wings (pakpak) and heart (corazon).
It should be eaten with a serving of rice, with a little of the orange oil utilize to flavor it poured over the rice. You can visit Manokan Country where a row of Inasal restaurants is found. 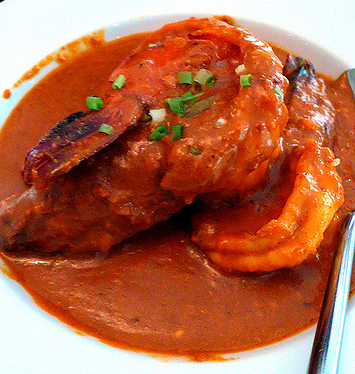 The fat of various crabs is pressed and sautéed in garlic. This high cholesterol Filipino food is frequently utilized as a sauce or eaten with rice and fried fish. The best of such dish comes from Pampanga, Bulacan, and Tarlac. It is worth buying a few bottles from the markets there and pasalubong shops such as Bulacan Sweets. 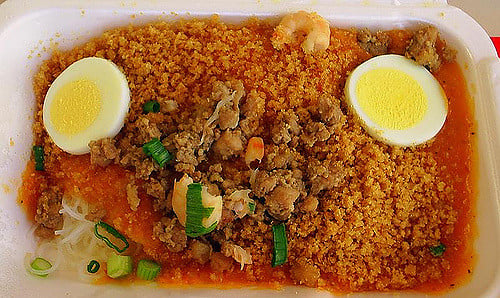 When Filipinos have visitors, they do not skimp. Pancit palabok, which is served on many different parties, oozes with textures and flavors. The noodle dish is topped with rice noodles, which is an orange sauce made from pork, shrimps, shrimp broth, chicharon (pork rinds), hard boiled eggs, and sometimes squid and oysters. 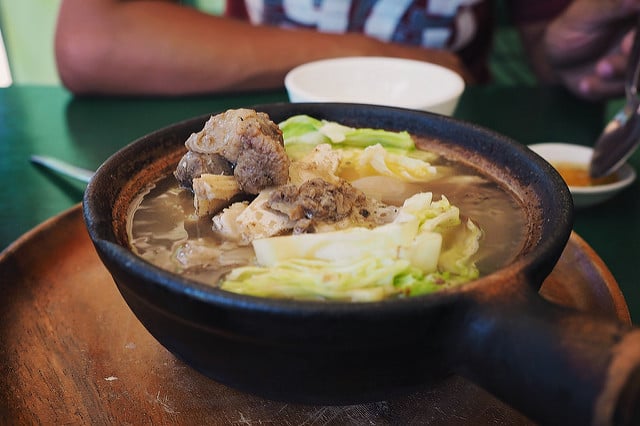 Despite the persistent heat, Filipino people frequently enjoy sipping the hot bulalo soup cooked with from the freshly slaughtered Batangas beef. The rich broth is filled with flavors oozed from the beef after hours of boiling. The bones are huge, meaning a lot more bone marrow to revel in. A row of restaurants serving bulalo are found in Santo Tomas, Batangas. 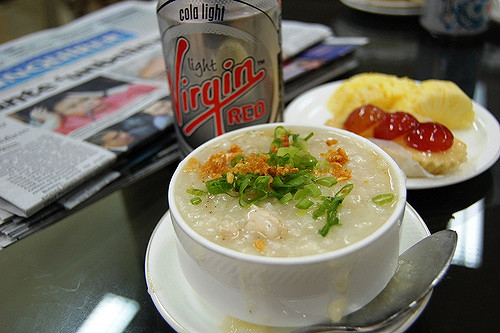 Filipinos turn to Arroz Caldo, a congee or a thick chicken-rice porridge to soothe them if they’re sick. Cooked with ginger, occasionally garnished with hard-boiled egg, and topped green onions and toasted garlic, this Filipino dish is sold in street-side food stalls. If dining outside does not suit your preference, there are the Via Mare outlets all around Manila. 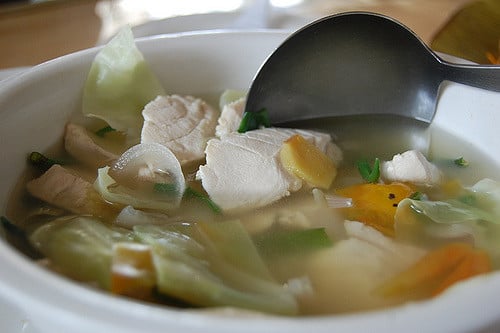 The freshness of the rich marine life of Cebu can be savored in its fish tinola. It is a simple sour broth seasoned with tomatoes, onions, and tamarind (sambag) and cooked over firewood for a couple of hours. 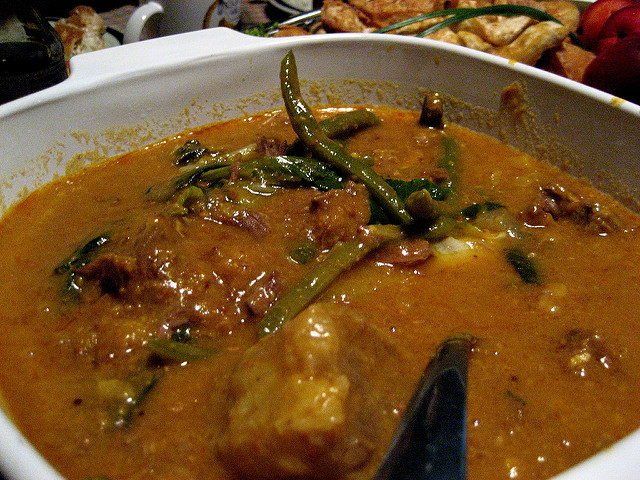 This oxtail stew has the most savory sauce made from crushed peanuts and ground toasted rice. Banana blossom, string beans and eggplants add more stimulating textures, which makes it a complete meal. It is eaten with bagoong (shrimp paste) and steamed rice. While our mom’s kare-kare is the best, Cafe Juanita’s version is authentic. 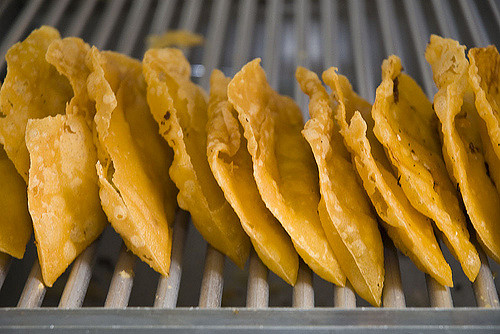 It may have a name of Spanish origin, but all its ingredients are local. Bean sprouts, grated unripe papaya, or longaniza (pork sausage) and egg are stuffed in and deep-fried, along with a fiery vinegar sauce. Get this indispensable Filipino food from food stalls around the cathedrals in Laoag and Vigan. 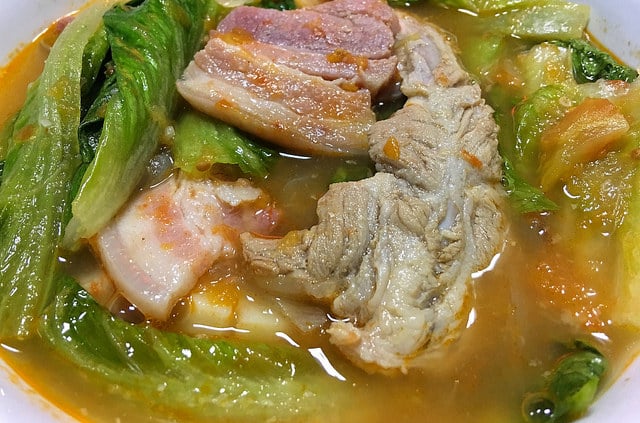 Sinigang is a stew of prawns, fish, beef or pork soured by fruits such as tamarind, tomatoes or kamias. Frequently accompanied by vegetables such as kangkong, taro and string beans, sinigang is eaten with rice. Sentro 1771's version known as Sinigang Corned Beef offers a modern, delicious spin on the dish. 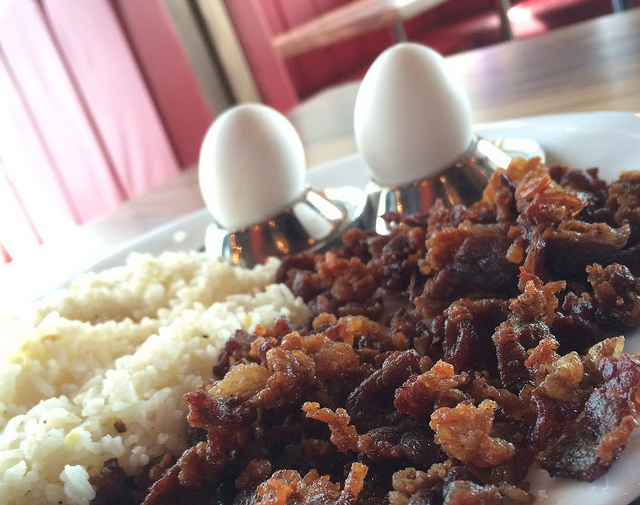 Filipinos are rice eaters, and breakfast time is not an exception. A tap-si-log contains thinly sliced dried marinated beef with garlic rice and a fried egg. While its breakfast fare, it is a quick, satisfying dish you can consume anytime and widely available in many places. Making it available at all times and even offered for deliveries, Tapa King Restaurant serves it in classic, spicy, and sweetish versions. 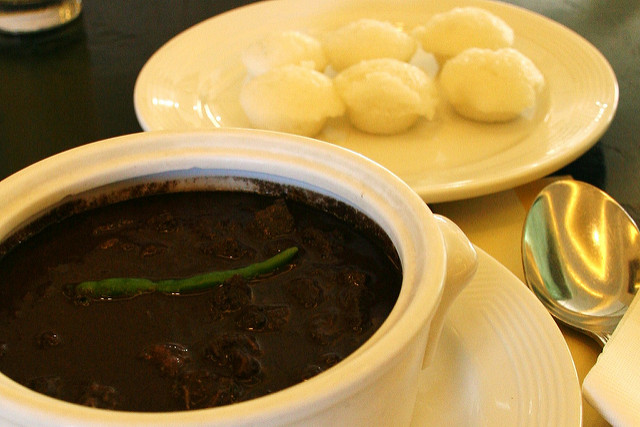 The dish may not look delicious. However, this black dish of pig innards and pork – simmered in fresh pig blood with onion, garlic, and oregano, and eaten along with rice cake (puto) or steamed rice – is a soothing dish for lots of Filipinos. The version of MilkyWay Cafe tastes clean and homemade. 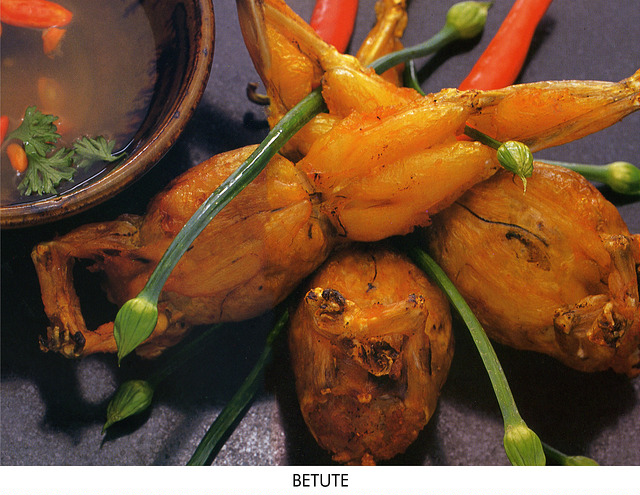 When it comes to turning frog legs into a delicacy, Filipinos simply take it to the next level. A frog is stuffed with minced pork and then deep-fry it. While betute is not for everybody, the bold can try the frog legs at Everybody's Cafe. 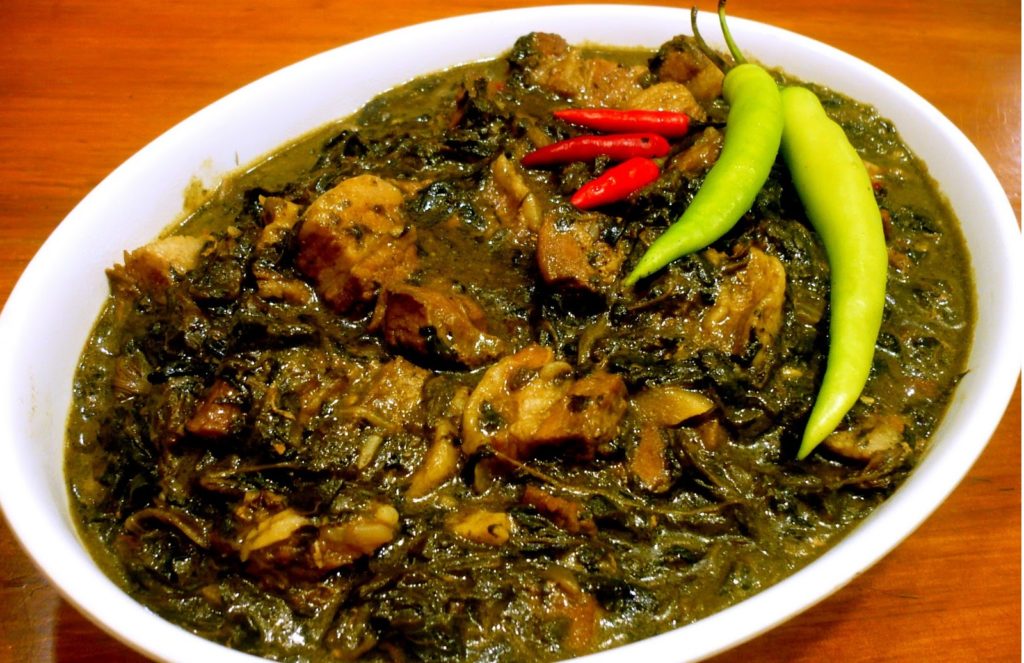 This is a dish made from taro leaves cooked in coconut milk is a daily staple in Bicol. Pieces of chili and meat are included to provide punch to the dish. It is consumed with steamed rice. The authentic Naga and Albay versions are most delicious. In Manila, laing can be located at Dencio's. 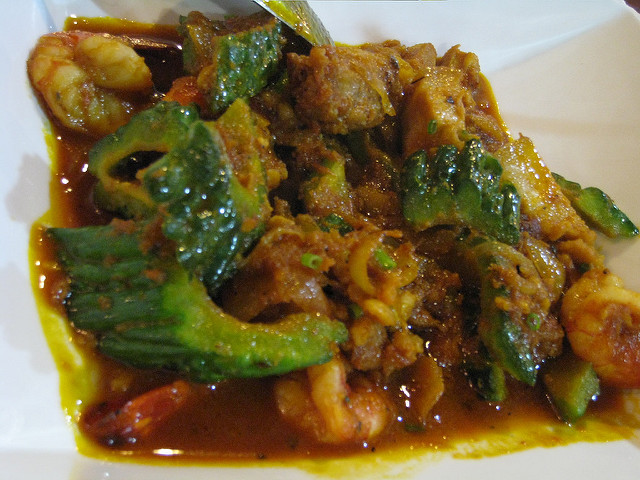 In northern Ilocos, the pinakbet consisting eggplant, okra, squash, tomatoes, bitter gourd, and bagoong (fish or shrimp paste) called is a favorite. This cheap, healthy, and easy-to-cook dish is popular around the archipelago. It’s cooked in many households and restaurants. It is available at Max's Fried Chicken, Manila. Try it there! 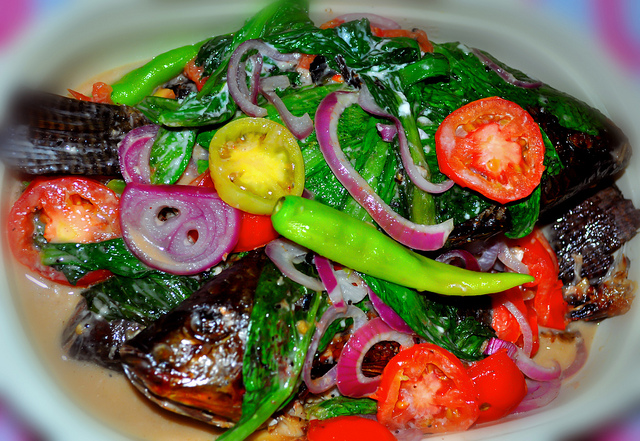 Cooking with fresh coconut milk is a popular cooking method in the Quezon Province. Freshwater tilapia is grilled and then simmered in chili and coconut milk. It is certainly freshest when consumed near the fishponds like they do at Kamayan Sa Palaisdaan. 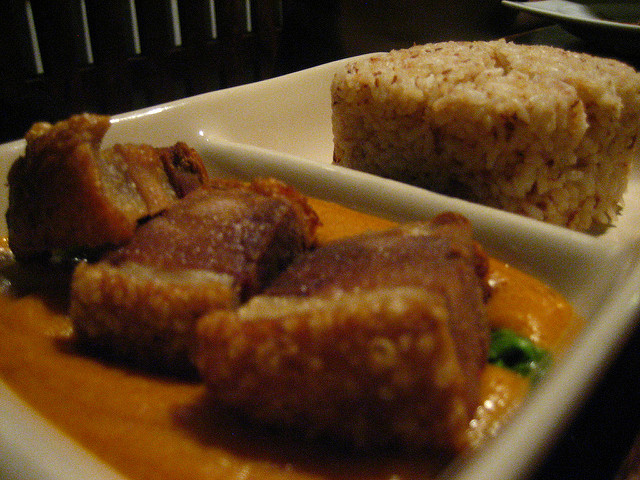 The lechon kawali is a widely held dish all over the Philippines. Meanwhile, bagnet, a similar food from the northern Ilocos, is sought-after for its enticing crunchy skin immersed in the sweet and sour vinegar sukang Iloko. Purchase it from the local markets of Ilocos, or at Cafe Juanita. 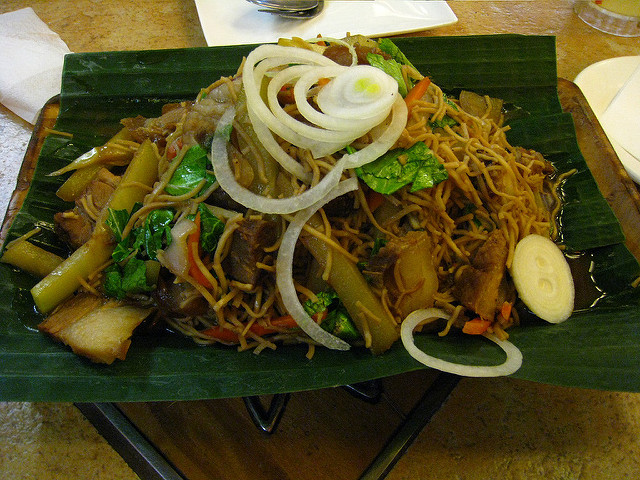 Trust Filipino creativity to revise noodles to their own lifestyle. In Quezon, this dish is served on banana leaf and then slurped. Garnished with chayote, carrots, and a couple pieces of meat, this inexpensive noodle dish is most frequently eaten by jeepney drivers and students. For a special version, there is the Old Center Panciteria, which has been producing the noodles since the 1930’s. Cooks there include lechon, vegetables, or even provide you with a fork. 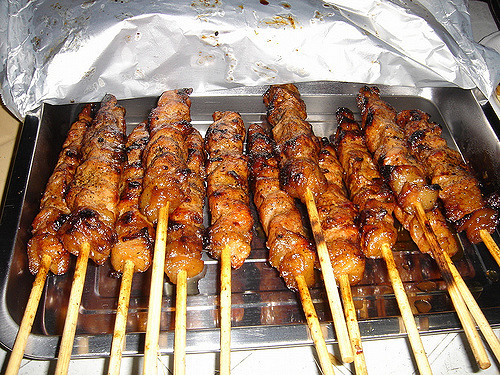 In a place where nearly everything is marinated, and barbecued in the street corners, everybody has their preferred barbecue meat – Pork which is the most common. Cebu is a popular place for barbecue-food stalls along Larsian Street. Residents from Manila are hooked to that from Ineng's Special BBQ, which has numerous outlets in Manila, for its huge, chunky pork pieces with a salty-sweet marinade. 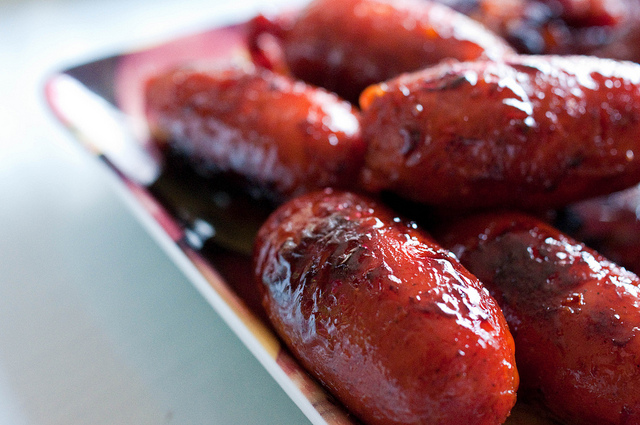 Each province has their own version of longaniza, a pork sausage. It varies from sweet or garlicky to spicy. Frequently eaten for breakfast with fried egg, rice, and a dipping vinegar sauce. 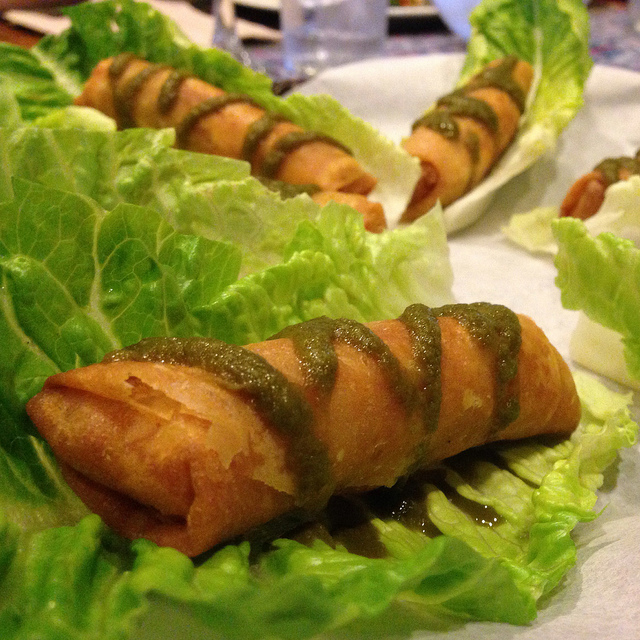 The coconut tree’s fruit, leaves, and the pith are used in a Filipino dish. The pith makes a tender and sweet filling for fresh lumpia (Filipino version of spring roll). An egg wrapper consists of a delicious filling of ubod (the pith), pork, shrimps, onions, and sweet sauce. Bacolod city is popular for its tiny version of this lumpia. 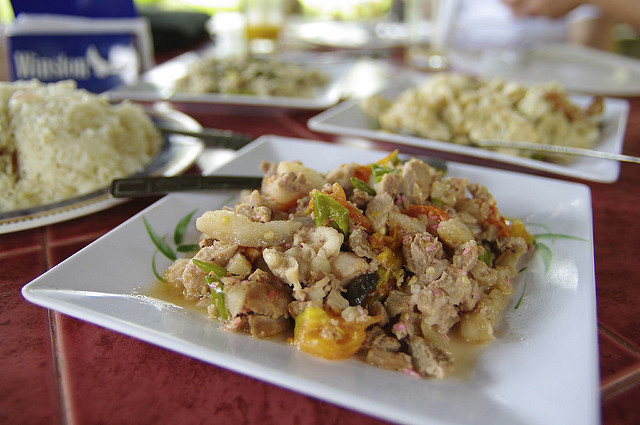 A fitting tribute to folks who love spicy food and coconut is Bicol Express, which is a fiery chili, coconut milk, and pork stew. You can try at Top Haus in Makati. 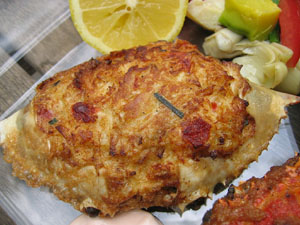 Filipino cooks are never intimidated by ambiguous food preparations such as relyenong alimango. The crab is carefully peeled then sautéed with onions, herbs, tomatoes, and stuffed into the crab shell, and then deep fried.
Chicken or milkfish (bangus) are cooked relyeno as well. Frequently cooked in many homes for fiestas, but resourceful folks sell them at Sunday market (Edsa, Centris Mall) or the Saturday market at Salcedo Village, Makati.

A trip to the Philippines wouldn’t be complete without trying the famous balut. Vendors selling these eggs chant “Baluuuuut!” to attract buyers. This duck embryo is boiled and served with spicy vinegar and rock salt and sometimes consumed with beer. 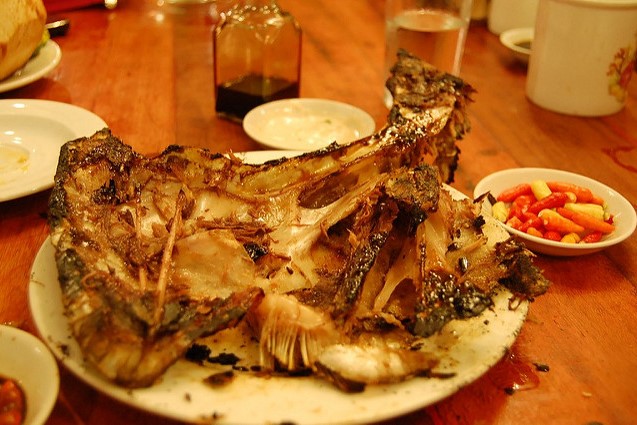 Davao City and General Santos are popular for their many ways with tuna. The jaw or panga is frequently grilled and dipped in a sauce of vinegar, soy sauce, calamansi, and chili. 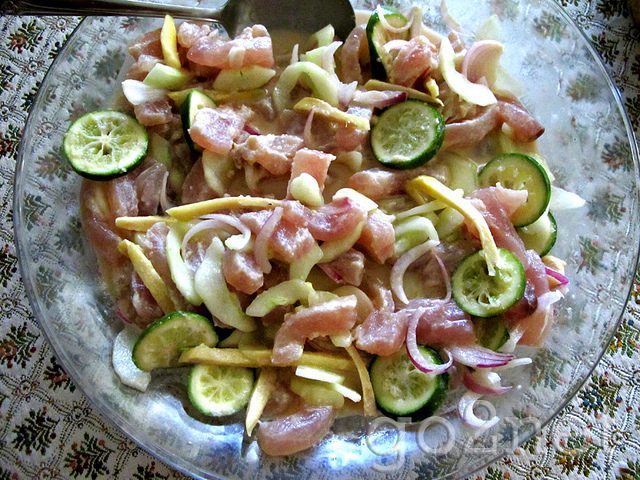 Fish Kinilaw is dressed in palm coconut vinegar, chilli, ginger, and spices. Every province has its unique way of the dish preparation. The majority of wet markets will get this ready for you. Try it in Sutukil, at Lapu-Lapu City, Mactan, Cebu).

We hope you enjoyed this post. Filipino dishes are really delicious – they taste as good as they look.