This brief history of arnis talks about the legend of the Anting-anting (talisman) and its significance in Filipino Martial Arts.

In a town fiesta in Mabolo district Cebu, an eskrimador named Vicente “Inting” Carin saw his friend chased down by seven men. One of the men drew a knife and was about to stab his friend on the back, but Carin parried the thrust and kicked the attacker.

The attackers ganged up on Carin. The attacks were fast and simultaneous. Carin did his best to defend himself but one of the attackers hit him with a wooden chair at the back of his head, sending him sprawling to the ground. Another attacker sat on top of him and tried to finish him with a knife.

He was stabbed twice in the abdomen. He managed to disarm his assailant and countered with a lethal thrust into the later's armpit. At this point, police arrived and Carin lost consciousness. His assailant laid dead while two others are seriously wounded.

The medical team found no pulse on Carin and so he was pronounced dead and taken to the medical parlour. But in the funeral parlour, one of his friends; Grandmaster Eulogio “Yoling” Canete realize that Carin was still breathing. He was immediately taken to the hospital where he recovered.

While many point Carin's miraculous survival to his knife fighting skills, his family and friends assert that it was the “anting-anting” or talisman that saved his life. Carin wears the anting-anting wherever her goes and it is believed to be the source of his strength and resilience.

An “anting-anting” is an object that contains supernatural powers and is a common practice in old Filipino Martial Arts. While the mystic amulet is one of the most common types of Filipino anting-anting, the anting-anting comes in a variety of forms.

It could be an “oracion” (prayer), a crocodile tooth or a small stone. The ways of getting an anting-anting are varied as well. Some of these were passed on from generation to generation while others were thought to be attained after beating spirit warriors. Also, the belief system behind the concept anting-anting is a mixture of Catholicism and animism.

People who have an anting-anting think that its power and capacity is best tested and replenished during Good Fridays of the Holy Week. The Catholic Church and many other Filipino evangelical churches don’t condone the use of such.

It was at the end of the 1990’s that numerous Filipino martial arts (FMA) practitioner began testing out oraciones. They have entered an ancient blade faction whose initiation rituals include being slashed by a sharp bolo many times.

This particular form of anting-anting is categorized under the “kabal” or “kunat oracion” that were thought to make the bearer resistant to weapon attacks. My friends emerged uninjured from the initiation rites. However, one of them, who attempted to replicate the deed in an independent manner, got a very severe injury.

Another form of anting-anting also commonly associated with Eskrima practitioner is the “tagaliwas (diverter)” that states to have the capacity to cause the fired bullets to miss at point blank range.

In an article by Marilitz Dizon entitled “Unmasking the Art – Artist“ (Rapid Journal Vol. 6 No. 3), Romeo Macapagal, who was Grandmaster Antonio “Tatang” Illustrisimo’s senior student, recounts his experience on the demonstration of his teacher of this kind of power – it says that;

before in 1992, during that time where Tatang’s health deteriorated, his mind was very focused and sharp, and his will power great. During Good Fridays, we would often go to empty parking lots to test this power. 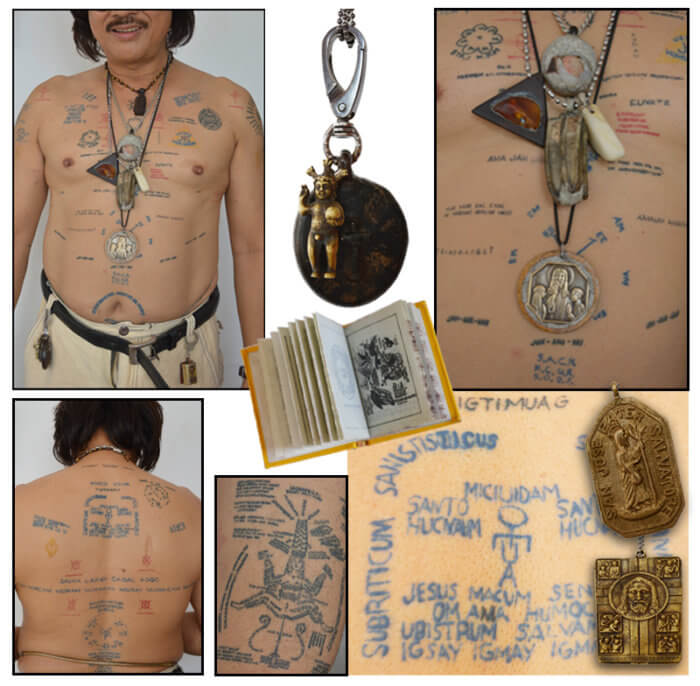 On a piece of paper, Tatang would write a couple of oraciones and then have it established for the target. I had competent shots, but from far away (five meters) I was only shooting on that 8×11 inch piece of paper, only knocking its edges at three meters. Good ammo, good squeeze, good sight pictures, but we couldn’t hit the target area. Whatever the mechanisms are, it really worked.

One well-known use of the anting-anting that ended badly was the Valentin delos Santos case as well as his religio-political organization Lapiang Malaya. In May 1967, Delos Santos and his fellow members demanded reforms and changes from the then president Marcos. The group was armed with bladed weapons and thought that their anting-anting could protect them against harms in the march but they were killed.

The Significance of Anting-atings in the Brief History of Arnis

In the Philippines, using anting-antings is nearly always linked with uprisings. During the Philippine Revolution against the Spaniards in 1896, it was said that Supremo Andres Bonifacio wore an amulet called the “Santiago de Galicia” – Birhen del Pilar to protect against harm.

Another famous Anting-anting is that of Gregorio Aglipay’s – he founded Philippine Independent Church – as stated in “The Filipino Martial Arts” by Nid Anima;

Perhaps the coincidence that this writer is Aglipay’s godson qualifies him for the revelation of factual information about the Aglipayan bishop which is heretofore unchronicled.

The Anting-anting was Considered a Defense Tool

The Anting-ating was so significant to many eskrimadors of old that many consider it an equipment of arnis. The Anting-anting was considered a self-defense tool with magical powers that enalbe to user to do unbelievable feats such as withstand bullets and heal injuries.

While a lot of Eskrima practitioners that still think that anting-antings are part of their martial arts regime, most Filipino FMA practitioners now put more emphasis on the practical skills of the system than its esoteric practices.

I got the following succinct answer from Master Yuli Romo, another senior student of Tatang Illustrisimo and founder of Bahad Zubu when I asked his opinion on the subject:

I believe in oracion but I give more importance to practical skills. The Bible says that we have guardian angels and they were there for our protection. I believe in that. But to say that I’ll use an oracion so that my opponent would not be able to hit me, that is another story.

The Anting-anting, through no longer as popular, remains one of the most popular items in the brief history of arnis. Its influence in escrima stick fighting is significant and that's why it is considered one of the symbols of the unique Filipino culture.

We hope you enjoyed this post. Do you believe in the power of talismans? If you do, feel free to share your thoughts in the comments. We'd love to hear from you.

And if you enjoyed this post, you may also like our post about Filipino weapons with poisons that ancient Filipino warriors use for hunting and fighting – List of Filipino Martial Arts that Use Poisons.