This post will discuss the various essential principles surrounding Balintawak Escrima. These rules are implemented throughout the practitioner’s training to accomplish an objective in combat.

Learning this will allow the practitioner to enhance his or her skills such as speed, power, and striking power.

How to be a Grandmaster

This epic story will inspire you to become an Eskrima Master!

How can you close the gap between your opponent and you without getting stricken or losing your psychological and physical balance? There are numerous set techniques.

One very common way to close the gap is by shuffling. To shuffle in, you to use your rear leg to push and drag your body forward. This shuffling forward motion will close the distance between you and your opponent in such a way that you are in range to hit him with the weapon.

Keep your entire body relaxed, with least tension to generate extremely fast attacks. Shift the hand first before shifting the body to provide a hard-to-block starting blow. Use non-telegraphic movement for a hit. Use the least amount of movement when attacking.

Attacks should be efficient, without the wind- up movements to get optimal speed. Don't wind-up for an immense power; it will decrease the speed of delivery, and the blow will less probably to land.

Never tense the entire body in trying to make the blow greater. Your focus should be more precise. Focus must be confined to the region of contact. Shift your hand in coordination with your body for an immense, powerful blow.
Follow through with your hits and your blows as well for power, utilizing a well-timed step & torque.

In power strikes, utilize torque and follow through or utilize a wrist snap. For instance, a wrist snap is there for a throat chop.

For body twists, your weight should be dropped, and your attacks should be leaned into for better speed, power, and reach. However, do not completely straighten your arm except if making contact with a blow. You could get an elbow broken.

Enhance your attacks' force, speed, and range with a slumping movement. Make use of gravity to aid you. This is obvious when you raise then slump with elbow blows. Twisting and slumping aid with power. Allow your strike's energy go to your opponent, and not to the ground.

We hit before landing the lead foot.

The sound philosophy of western physics and physiology are where the effects of blows are based upon. Occult powers are never postulated.

When utilizing the stick, we typically strike to the targets that are bony. When striking with the hand, we will frequently strike to the soft areas. Strike the sensitive areas with a hit. Utilize the proper weapon for the strikes.

Accept weak blows in response for giving damaging ones.

In Balintawak and Eskrima in general, the stick is only the extension of the arm. This couldn't be truer than in Balintawak where the fight takes place at close range. The principle of shortening the weapon is simply that you use your shorter weapons if they are more applicable under such circumstances.

Why use a stick when a punch or elbow is more appropriate? Why use a kick when a knee is more applicable? The principle gives emphasis on the use of the human weapon – his bare hands – so that the fight continues even at close range. 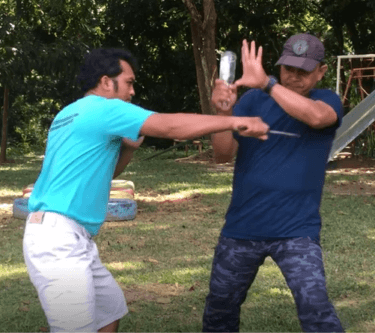 Cuentada is considered the best technique in Balintawak. “Cuentada” is a Visayan (Filipino) term for “calculation”. In Cuentada, you are trying to feel and anticipate the opponent's movements using your senses. In Balintawak, this is usually done using the checking hand.

These principles, if employed, can make a huge difference in the practitioner. For more details about the principles of Balintawak, read through our other articles in the blog section.