This book Balintawak Arnis, Volume 1, written by Andrew Obon is one of the few books about Balintawak Arnis Cebu that is available in the world today. Balintawak Eskrima is one of modern Filipino Martial Arts (FMA) today and there have been only three books written about the FMA style online. 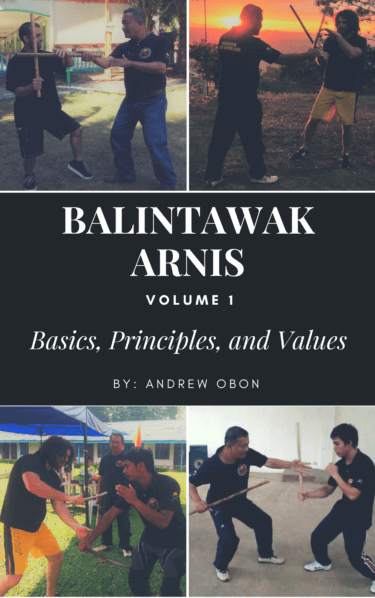 In this post, I will include excerpts from the book and explain as much as I can what those excerpts and quotes mean.

How to be a Grandmaster

This epic story will inspire you to become an Eskrima Master!

About the Balintawak Arnis Cebu Book

This book is a compilation of all the basic concepts and principles Master Andrew developed through his more than forty years of Filipino Martial Arts experience. Master Andrew combined all of his ideas from his teachings into this book.

As I've mentioned a few times in this post, Balintawak arnis Cebu is one of the most versatile and effective styles of Filipino Martial Arts. It doesn't matter what your martial arts background is, you can still benefit from Balintawak Arnis.

In an interview with Master Andrew Obon earlier, he mentioned the following unique attributes of Balintawak Eskrima:

Simple, practical and effective. It uses only one stock and treats it as a mere extension of the arms. With or without it you can still effectively defend yourself.

Stemless blocks and strikes. Its strikes and blocks are delivered from where the weapon is positioned. Its movements are non-telegraphic. Hence, its strikes are fast and better focused.

Human-friendly movements. Its footwork, postures, and movement are natural, akin to Western boxing. It is adept to short and shallow footwork. Thus, it creates flexibility and dexterity in the execution of offensive, defensive and counter-offensive maneuvers.

The economy of movement to express the optimum. This is express in all aspect of its movements. Specializes in close-range combat. This is the most difficult combat range to master. Here, all human weapons are employed – anything goes.

One of a kind teaching the system. The agak process of coaching is highly personalized – a mentoring approach. No structured form or choreographed moves as you proceed into the advanced levels.

So in Balintawak Arnis Manila, the stick is only the extension of the arms. Your weapons in Eskrima include not only the different sticks and blades but also your human weapons – arms, legs, elbows, knees, forehead, etc. You also have secondary weapons such as a ballpoint pen, magazine roll, car keys, belt, etc.,

Thus, there is an emphasis on combat in Balintawak Arnis.

A Fast and Comprehensive History of Balintawak Schools

First off, Master Andrew writes a comprehensive history about Balintawak schools with testimonies from Master Tinong Ibanez who a closed-door student of Grandmaster Anciong Bacon himself.

Did you know why Anciong was called “Anciong Boang (crazy)” by his neighbours? Master Andrew shares these never-before-heard stories in this book.

Another unique feature in this book is the “Striking Rope Drill” in Chapter 1. The striking rope drill was recommended by legendary Grandmasters and deathmatch fighters like Tinong Ibanez of the Balintawak style who was his first master. It is one of the best stick fighting drills to develop speed, timing and accuracy.

The late GM Tinong Ibanez won the last deathmatch sanctioned by the Supreme Grand Master Venancio Anciong Bacon. The deathmatch was held in one of the town fiesta Cebu. He defeated a Punta y Daga opponent using fast and accurate strikes. The victory made him a legend in the Filipino stick fighting arena.

The striking with the rope technique or drill is done by hitting the tip of a 5-inch rope that is attached to a swivel with the tip of your stick. The strikes must be flowing – these are called follow-through strikes.

While striking the tip of the rope, you will notice that the rope will dangle around the swivel. Thus, you must adjust your body position according to the position and movements of the rope. It is essential to do circular footwork under such circumstances.

A strike is a quick blow or thrust with a cane, as it applies here. It is delivered with the swiftness of a strike. As such, the basic or fundamental strikes are delivered in a straight line at twelve angles of attack. The shortest distance between two points is connected by a straight line. Thus, a strike is normally delivered in a straight line fashion, to optimize on speed. When there is speed, power in the strike comes naturally. This is enhanced by the interplay of torque power of specific muscle groups involved.

So the strikes of Balintawak Eskrima are fast and direct. It does not wind up or telegraphs but strikes in a short and fast motion. In Balintawak, such strikes are called “stemless strikes.”

The book discusses Balintawak 12 basic strikes in good order. Master Andrew arranged the strikes into four sets that practitioners can easily practice and memorize. The principle and proper technical execution of each strike becomes the emphasis of this section.

Defense is a maneuver employed to oppose attacks delivered against one’s person. It is an expression of one’s basic human instinct of survival. Since it is instinctive, it works best when its moves are natural to our human nature.

The strength of our defense techniques lie in these simple, practical, effective and natural method. Its natural movement makes it adaptable to empty hands defense, applying similar principles as the weapon.

Just like its strikes, Balintawak Bobby Taboada uses blocks that are short and direct. The purpose being is that they are easier and safer to employ, making the motion more natural and attuned with the human body. Thus, Balintawak can block or defend fast and accurately.

In the Balintawak near me Defense and Counter, Master Andrew has laid down this general guideline:

On the outset, a counter-strike should as much as possible, be delivered from a strong base or position. This is the reason why great emphasis is given to the proper blocking in particular and defence in general, for the novice in our system.

It is important to develop in them the habit of proper technical execution in counter-attacking and in all other techniques, for that matter. A good counter-attack hinges on a good defence, and vice-versa.

According to Master Andrew, a counter strike should be delivered from a strong defence and it should be executed simultaneously with the defence.  Thus, counter-attacking should be fluid, not erratic in order for the counter-striking to be effective.

In Chapter 11 of the Values System for Balintawak Arnis Cebu and other martial arts, Master Andrew stated:

Moral values are an integral and an essential part in the teaching and learning of a martial arts system such as Balintawak Arnis. Values as guiding principles that help one to discern what is right, and desirable in life, especially regarding personal conduct in a martial way, as referred to here.

As such, it is the moral obligation of every genuine teacher in the martial arts to inculcate the moral values among his students and disciples. A martial system or school that does not include a moral value in its curriculum falls short of its obligation to civil society. It more often than not produces students who are inclined to abuse their skills and knowledge.

As a deadly art, it Balintawak Martial Arts should have a value system in order for the students to develop self-control and respect while training in the art. Thus, the values system help develop the practitioner's character.

Over-all it is a good and informative book about Balintawak Eskrima and I recommend it to all martial artists. I give the book four out of five.